I've always had a fascination with pop-up books and have a small collection that I love to flip through. With my significant other's birthday coming, I decided to experiment and try my hand at making a pop-up card along with my Distress Inks and some of my favorite stamps and die.

Slight hitch, I don't know how to make anything pop-up. 😅 Enter Matthew Reinhart, a brilliant paper engineer, illustrator and children's book author who has a really fun channel that makes it easy for anyone to learn how to make a pop-up. His channel has a lot of print outs that you can follow along easily. I cannot recommend his channel enough! To make this card I followed his Pop-Up School with Matthew Reinhart: Lesson 3 D-E video on YouTube. I only used lesson 3 E, but you could also do D for fun! 😁

I used Neenah 90lb/163gsm card stock in white for a nice sturdy card base, folding a 7"x10" sheet in half. Since I planned on doing a lot of Distress Ink layering for the front panel and the pop-up panel, I went with Strathmore Watercolor cold press paper, since watercolor paper can hold a lot more water and ink without tearing. The front panel is cut down to 6 13/16" x 4 13/16", so that when I stick it on to the card base, I'd have a nice thin border around it.

Its easier to finish any stamping I needed to do on the card base, before sticking the v-fold mechanism on to it. I wanted a fun background and used the Confetti Turnabout stamp from Concord & 9th. I went with only just three Distress Inks, Twisted Citron, Cracked Pistachio and Tumbled Glass but moved them around to get a larger pattern around the center of the card. I also stamped this pattern on to the v-fold mechanism just so that it wasn't blank, but this is completely optional to do.

I was aiming for a colorful and bright birthday card that was sort of masculine-ish. I don't think I hit that last mark, but at least it looks like a unisex kind of card? 😅 That is moderately presentable!

For the background of the front panel, I would blend Distress inks Twisted Citron, Cracked Pistachio, Tumbled Glass, Peacock Feathers, Broken China, Blueprint Sketch, and Salty Ocean in different areas. Mostly concentrating my color blending on the bottom of the front panel. I wasn't too concerned if they blended properly into each other, as I was going to layer on more inks on top of it later on. You could use your blending tool or a blending brush to do this, but if you are using a blending brush, don't forget to wipe it clean before you switch inks.

Once I was satisfied with the coverage I had on, I applied some of the same colors directly on to my Ranger Non Stick Craft Sheet, and sprayed/misted water using my Distress Sprayer on top of the inks. This would cause them to form beads of color, which I would then dab my front panel on, to transfer some of that ink in the areas where I wanted. If too much ink transferred to your front panel, then just dab it off with tissue paper. I also used a heat tool to dry up the ink, before I added more ink to the paper. This prevents the colors from just mixing into each other and becoming a single blob of color.

A good tip is to start working with lighter colors first, and then make your way to darker colors. You can tip the paper around or by tapping it to make the inks flow randomly, or in the direction you want. Also, less water means a more saturated color will transfer on to your paper, but it won't move as much as the colors that had more water added to them. Take your time, in building your layers, till you're happy with how it looks.

I wanted to use the largest die from the Lovely Labels set from The Stamp Market, for my pop-up panel. I traced it out on watercolor paper, so that I knew where to place my colors. Using the same technique and inks that I used for my front panel, I concentrated the brighter colors towards the center with the darker colors around the edges.

In my eagerness, I completely forgot to follow one cardinal rule when it comes to embossing, and that is to make sure the surface is completely dry before I emboss over it even if I wiped my anti-static pouch over it. Also, I forgot that I was embossing on cold press watercolor paper, which has a more toothier texture, which led to the embossing ink not stamping completely in some areas. To counter this, I would first heat up the embossing powder that was on the paper, then stamp again over it and pray that the ink transfers all over. This is where a stamping platform comes in handy, since I didn't move the stamps, I just needed to place the paper back in and stamp again on top of it. Then cover it with embossing powder and heat it up with my heat tool, but always remembering to brush away the excess powder before heating it. A quicker fix is to use an embossing pen, and fill in the spots you want your embossing powder to stick on to.

Alphabet stamps are so versatile, you can just stamp out any greeting you need, which is what I did for my front panel. I used the Something Extra Alphabet Set from The Stamp Market, to stamp and emboss "HEY YOU" with Ranger White Super Fine Detail embossing powder. For the pop-up panel, I needed a greeting that was similar in font to the alphas I had used. Thankfully, I had the Everyday Greetings stamp set from Concord & 9th which matched perfectly! You'll see in the video below, how I had to correct my mistakes by double embossing. 😅 After I was done with embossing my sentiment over the pop-up panel, I carefully positioned the die around the sentiment and ran it through my Sizzix Bigshot.

To stick the v-fold mechanism, you could use either glue or double-sided tape. I'm really messy with glue, so I went with double-sided tape. I put them on the flaps and cut off whatever was hanging out. I also measured 3" along the center fold, from the bottom edge of the card base. This is where the bottom tip of the v-fold mechanism will be aligned to.

Now the last bit is slightly tricky, and I think its easier if you put double sided tape on the platform instead of glue, as you will need to reposition your pop-up panel a bit to get it right. Place your panel on the platform, but do not press down on it. Instead see, if it covers the majority of the mechanism, and slightly close the card to see if the pop-up panel stays hidden in the card. If part of it is peeking out, then you will need to reposition it again. When you are ready and confident that its positioned correctly, then you can close the card and press down. All that is left is to stick the front panel to the front of the card base with either double-sided tape or foam tape for even more dimension.

Practice makes perfect or at least close to it

Like I said, I didn't know anything about how to make a pop-up and wasn't even sure if my idea was going to work. So before spending a lot of time on making the panels, I made an incredibly rough version of  my card, using printer paper and a single ink color, to see if it would work. After seeing that it did, I moved on to making my second mock-up, wherein I experimented with colors, techniques, embossing powders and even changing the size of my card. I'd write on these mock-up cards notes and changes I wanted to do. Doing this not only helps me design a better card but it also helps me be more confident in making my final card.

I hope you enjoyed this tutorial or the video below, and try your hand at making a pop-up card! 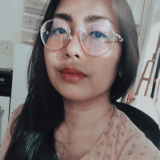 Loves cats and crafting, and is currently adding roller skating/blading to the mix. Hopes to spread her love of crafting to others and someday do a drop in at the skate park.

Comments will be approved before showing up. The first of my assignments for the Altenew Educator Certification Program I am participating in. This project is for the All About Layering 1 by Nicole Picadura. Ever wondered what else can you do with your growing collection of patterned paper? You could try making your very own journal using this hardcover, coptic stitch bookbinding tutorial.